“Great boards give management the ability to tune out the noise.” 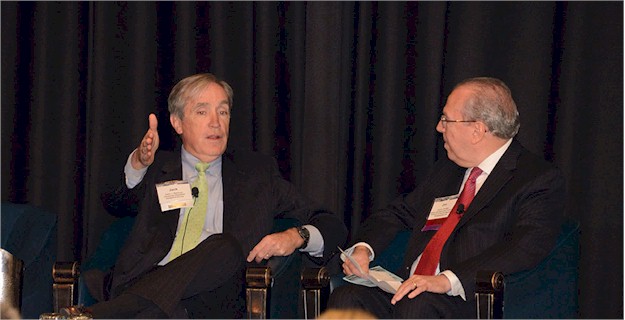 “Great boards give management the ability to tune out the noise.”

John J. “Jack” Brennan is chairman emeritus and senior advisor of Vanguard Group Inc. With assets totaling over $3.1 trillion, Vanguard, based in Malvern, Pa., is the largest mutual fund company in the world. Following his undergraduate education at Dartmouth College and an MBA from Harvard Business School, Brennan started out his career with a private company, household cleaning supplies manufacturer S.C. Johnson & Son. He joined Vanguard, another resolutely private company, in 1982 as assistant to Vanguard founder John Bogle. He was named president of the firm in 1989, served as CEO from 1996 to 2008 and chairman of the board from 1998 to 2009. He is a director of General Electric Co., Guardian Life Insurance Company of America, and LPL Financial Holdings Inc., among other board affiliations. The following is an edited excerpt of the Q&A session conducted by Directors & Boards editor James Kristie at the Private Company Governance Summit 2015.

Let’s start with the most basic of questions: A board for a private company — good idea or not?

It is a great idea. When I came out of grad school, I had the privilege of working for a great family-owned company, S.C. Johnson. I came to Vanguard partly because it was private. But in each case, I found that the personal experience of having outside/in perspectives on our business from a strong board of directors was just a powerful force to make the private enterprise more successful. Whenever I talk to friends who run private companies, or family-controlled or family-owned companies, the first thing I talk to them about is the value of having that outside/in perspective. You don’t want friends or cronies as directors but serious people bringing you serious value from the board perspective. So the answer to the question is an absolute “Yes” — I am a huge fan of the idea that private companies should have a board.

On the Vanguard board you find current or former senior executives from such companies as IBM, Xerox, Rohm & Haas, Johnson & Johnson, Corning, and Cummins, plus other leaders such as the president of the University of Pennsylvania. Describe a bit what they brought to you as the CEO of Vanguard?

For a company that has grown as quickly as Vanguard — during my time at Vanguard, we grew at over 20% compounded per year — with a mostly homegrown leadership team, we needed a set of perspectives to guide us. I had a fantastic lead director, Larry Wilson, then the chairman and CEO of Rohm & Haas. He was running this huge global company serving on the board of what basically was a mono-line domestic company. But the perspective he could bring to me was unbelievably invaluable, both on leadership and on making hard decisions — and on the way you take a good company and try to inspire people to make it great. Where do you get perspective like that if not from people who are vested in the success of the organization by having signed on to the board? I don’t think I as the CEO, or my successor as the CEO today, could do what is required to lead this complex and now very large firm without the very experienced, very supportive people with diverse backgrounds that serve on the Vanguard board.

How does a CEO develop a productive relationship with his or her board?

It starts with candor. One of the things that can be so valuable for the leader of the private company in having a board is you may be able to have a more candid relationship with your directors than you can with most people in the organization. People think the old “it’s lonely at the top” is boloney until they are at the top and realize it is lonely. Here is something I pass on at the Vanguard training programs (with tongue in cheek, but to make a point): There are two major professional events in your life — the first is when you become a supervisor, because you then become a leader of people; and the second is when you become the CEO, because now you don’t have a boss anymore. So, do you now want this board to be your boss? Do you want them to be your friend? Do you want them to challenge you? The CEO has to be very candid about what that relationship is going to be.

Secondly, the CEO has to decide if this board is for him or her or is it for the whole leadership team? There are CEOs who want the board to know everybody in the company that they can possibly know. I happen to think it makes for a stronger board when management and the board members to have a relationship, but some people may not. Is that part of the deal on the private company board? You ought to be very clear as to what the board’s relationship with management will be.

And then you get down to the tactics of information flow. How informed will the board be to the financial dynamics of the private company? Or, to the real inner workings of the family dynamics? All of this comes back under this umbrella of candor being how you end up with a very solid and productive board/management relationship.

You have been quoted as saying, “Great boards give management the ability to tune out the noise.” Can you say a bit more about that?

Frankly, that is the single most important thing that a board, public or private, does. As a CEO, the business is your livelihood. You’re running 24 hours a day. It is hard to clear the fog, to tune out the noise. Directors come in from the outside and ask questions that someone who is fully vested fulltime in the success of the organization may find harder to ask. When I reflect on some seminal moments at Vanguard, we made better decisions because the directors looked at things this way when we were looking at them that way.

This is particularly important in a successful company, as Vanguard has been. You can start breathing your own air real easily. The “Yes, Jack” can be more common than being told “What, are you crazy?” Directors have no trouble saying, “You’re crazy.” That is really valuable. One of the secrets of what a great board can do for you is to knock you down a peg now and then.

CEO succession planning is such a crucial role played by a public company board. How about on the private company board?

If it’s preordained that the succession will move family member to family member, and if everybody — the board and the owners — agree, that’s fine. I for one wouldn’t serve on the board if the expectation was that I would have no input into the CEO succession. If it is a family situation, I believe the board should offer its view as to whether the person next in line is capable of leading the company. This is again where candor comes into the relationship that I, as the director, and you as the leader have. It’s one of the vital issues where you say, “What does it take to succeed in leading this company? Do we believe that it’s genetic? Or do we believe that there is a genetic component to it but we as a board can help make the designated leader’s chances of success that much better?”

I would have a hard time staying on a board where I was uncomfortable with the CEO. For me, the test of whether you want to be on the board is: who is the leader of the organization? I believe that our job as directors is to challenge and support, but if you don’t believe you have a shared set of values around standards and success, that board probably is not a great place to be.

I will make a broad generalization. A private company’s board service is largely given to substance. As a public company director there are exogenous pressures and requirements that come with regulations for public companies. That is probably the biggest difference. Then you come to the matter of who you are serving. For a director of a private company or a family-owned business, it is very clear who you are serving. In a board meeting you may be looking at the person who owns the company. But as a public company director you are the steward for, in some cases, millions of small investors. Each representative role is challenging and interesting. But the amount of regulatory requirements on the public side are part of why, at least as I talk to people, the idea of serving on first-class private company boards is so appealing.

Any advice on recruiting directors to a private company board?

Serving on a private company board is a very attractive thing. There is a big candidate pool that would like to serve interesting and well-managed companies. The team doing the recruiting — be it the CEO or perhaps family members — has to know what they are seeking in a director and they must find out why a potential candidate wants to be on the board and what do they expect from that board. It is a two-way street. To say we want to put together a board doesn’t make sense without a strategy for what the outcomes of having a board will be.

Good directors are going to want to know what your expectations are of them. So start with a strategy of why you want a board and then, secondarily, what kind of skills do you need on that board. Do a skills matrix: do you want technology expertise? Global expertise? Manufacturing? Marketing? Finance? Very diverse backgrounds? Go at it in a very strategic way. Don’t rush out and set up a board. That’s not a sensible thing. Great boards have a succession planning process just as great companies have effective succession planning. It really is no different than what a public company does in recruiting directors but you can be more discerning in some ways because there are fewer constituencies to satisfy.

This is how we, over many years, have recruited board members into Vanguard — when we weren’t very big either, by the way. There was a time when not everybody knew Vanguard, so we would sell very hard on what someone could learn from us and, importantly, what they could bring to us. Board recruiting needs to be an open market purchase, if you will, between the company and the director, where supply meets demand for the right reasons.