Family and Board Dynamics at a $3 Billion Enterprise 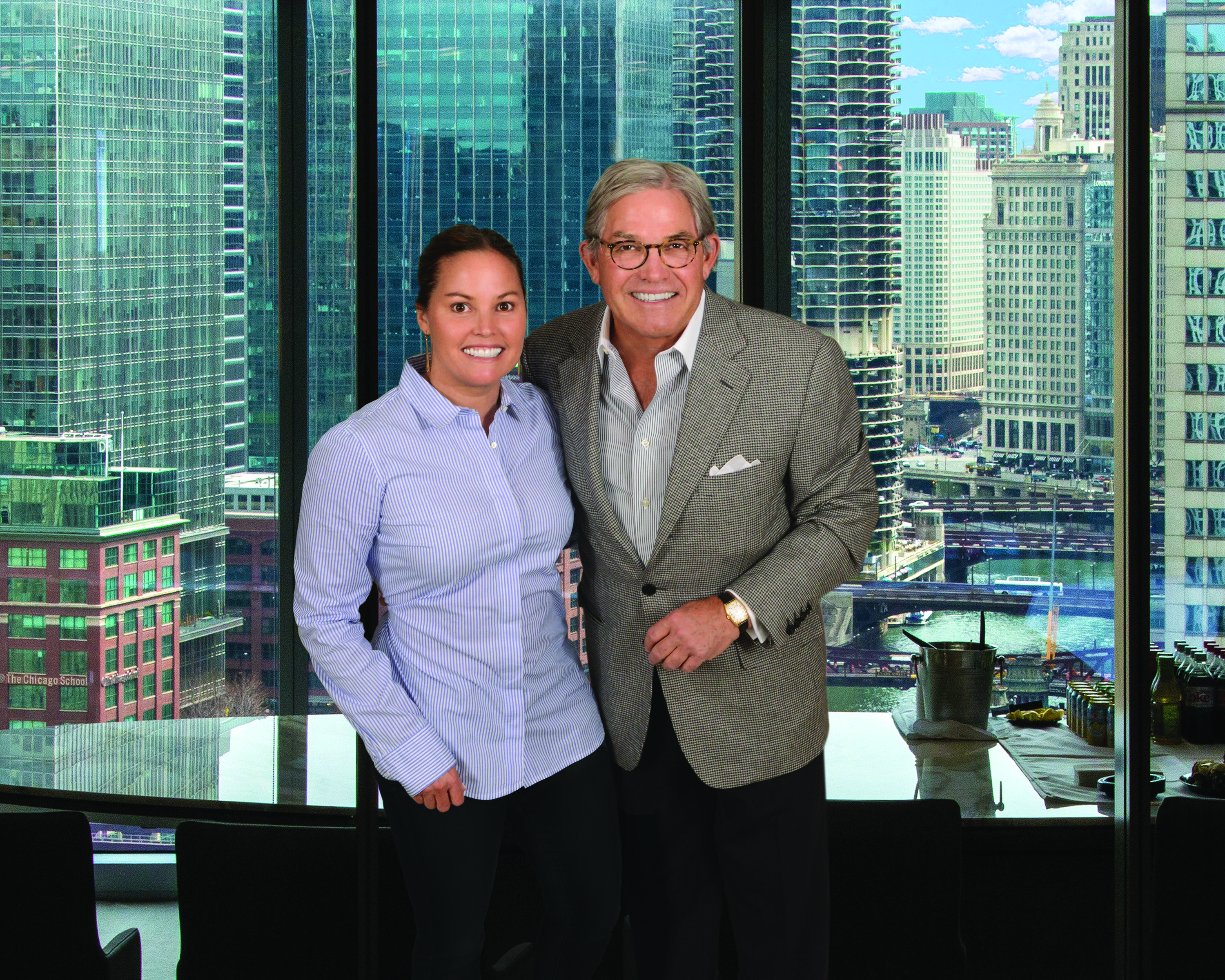 Family and Board Dynamics at a $3 Billion Enterprise

As The Duchossois Group has evolved over 102 years, so has its governance.

A few years after Craig Duchossois took over management of his family’s business, he had to confront the recession that resulted from the stock market crash in October 1987.

“Every single one of our major business units had a reversal,” says Duchossois, chairman and CEO of  The Duchossois Group Inc., based in Chicago. His reaction during the crisis, he recalls, was, “I’m in deep trouble.”

The company, which at the time was in the business of building railcar components, lacked an independent board to help him navigate through the tough times. “The board was my father and myself and our CFO at the time,” he says. “So I reached out and I said, ‘Dad, I think we need to establish a board of directors.’”

His father, Richard Duchossois, wasn’t initially amenable to this suggestion. “He said, ‘What for? We’re a family business, we’ll make all the calls,’” he recalls. “I [said,] ‘You know what? I need some help. I think you and I both need some help.’”

Eventually, the son prevailed. The company began with an advisory board. As the enterprise has evolved, so has its governance.

Founded in 1916 as a repair shop for railcar components, today the family enterprise consists of operating companies and investments valued at more than $3 billion. The operating companies provide access control for commercial and residential markets, including garage door openers and gate entry systems.

After the company recovered from the late-1980s recession, it began to grow by acquisition. “We ended up having sub-boards for each of the subsidiary companies that we were buying, and the next thing we knew, we had too many boards,” Duchossois explains.

Today, The Duchossois Group has one fiduciary board with 13 directors. Six are independents and seven are family members. Craig Duchossois is chairman and CEO. His father, 96, is chairman emeritus.

“My father really did not want to invite the rest of the family in,” Craig Duchossois says. “I [said,] ‘Listen. You and I someday are going to be gone. We’d better start training them now.’”

Three of the independent directors with sophisticated investment experience serve as an advisory board to the CEO of the investment company. Three independent directors who understand marketing technology, consumer products and mass merchandising serve the CEO of the group’s consumer products company in an advisory board capacity.

“I will not let myself or any family member sit in on the advisory boards, because I want the CEOs to be free from ownership and to look at these people as mentors and advisers,” Duchossois says.

The Duchossois family formed a family council 12 years ago. The council has provided a venue for family members who don’t work in the business to learn about it without “getting our fingers in the weeds,” says Duchossois’ daughter Ashley Joyce, a director of the company and president of the Duchossois Family Foundation.

As for learning about governance, Joyce says, “we really started educating ourselves. I would say about 80% of our family has gone through different types of long-term education, whether it’s been an 18-month course or a weeklong governance course. So on governance and leadership, we’re now kind of speaking the same language.”

Family members who aspire to roles in the family enterprise have ample opportunities to serve and to work with mentors.

Prospective family directors must start out as board observers. The observers serve two-year terms. As an observer, “you basically have to sit against the wall, and you can’t ask any questions” during board meetings, she says. Board observers are matched with independent directors, who serve as their advisers and confer with them before or after board meetings.

When Joyce was an observer, her adviser quizzed her on the board book prior to meetings, asking her to list what she considered to be the top three issues, state her concerns and describe what excited her about the materials.

Three years ago, Joyce became president of the 33-year-old Duchossois Family Foundation. Before that time, only Richard Duchossois and his children served on the board. When she took the reins, one of her first actions was to open board membership to married-ins. Today her mother, Janet Duchossois, serves as secretary of the foundation board.

“My mom said, ‘I have been a part of this family so long, but this is the first time I’ve really felt a part of the family business,’” she recalls.

The Duchossois family has established policies and guidelines in order to remove emotions from discussions involving the family’s relationship to its business. These include a communication policy, a family employment policy and eligibility criteria for nomination to the family enterprise’s various boards.

“Very early on, [family members] understand the expectation,” Craig Duchossois says. The first requirement for board eligibility, he says, is “Honor the family values.”

Joyce and family council chair Tyler Lenczuk, who is her cousin, “have done an excellent job of [emphasizing] that we need to learn how to constantly talk to ourselves and wrestle with issues,” Duchossois says.

“My father was all in favor of them starting at the vice-presidential level,” Duchossois says with a laugh. “But I made it very clear that they come in at entry level. They go through the same training as our [non-family] people. They know that they’re not going to go up the ladder without earning the respect and the trust of the employees and their supervisor and get a good report. I assign one or more mentors to these individuals.

“Our kids are on a fast track,” he adds. “We’ll move them through the organization with increased responsibilities as fast as they’re capable. We just want to make sure that we don’t put them in too quickly, because that’s what happened to me years ago.”

There are seven blood descendants in Joyce’s generation. All are married. Their children range in age from 2 to 12.

The members of her generation, she says, “have been trying to do a good job of educating [the children] and starting out as young as we can.”

The family council, with assistance from consultants, has developed an education platform. Education modules include Finance 101, the history of the family and what it means to be a responsible shareholder.

“We’re trying to instill the family history and get them excited about the family and the business,” she says.

During the annual shareholder meeting, the children have their own “shareholder meeting,” she says. One such meeting, which took place when the young attendees were ages 4 to 10, was led by members of the family office staff, who explained that one of the things the family business does is make garage-door openers.

“The older kids, who were ages 7 to 10, got to go to a test site and see the garage doors go up and down. The younger kids made garage doors out of Legos. And then they had to present to the family,” she adds.

Another lesson, taught by a consultant, focused on budgeting in the context of family values. The family’s 5- and 6-year-olds were tasked with building a piggy bank with materials purchased from a craft store. The consultant asked the children to describe the purpose of a piggy bank.

“All of a sudden, you’re talking about wealth,” Duchossois says. When the children said they could save money to buy candy, the consultant prompted them with other uses for the funds: to buy Christmas presents for mom and dad, donate to the less fortunate or save for the long term. At the end of the lesson, the children gave a presentation to their parents and grandparents.

“This blew me away. It was just absolutely fantastic,” he says. “They had fun, and the values that are important to the family were messaged on.

“Ashley and her peers are taking [NextGen] education to the next level,” he boasts. “We really are dedicated to having fun, concurrent with educating them about the values. And when they get to be freshmen in high school, then we’ll move into your traditional finance and economics [lessons] as well.”

Joyce, whose professional background is in social work, says that in preparing for board service alongside her father, she made it clear to him that she would not always vote in lockstep with him.

“There are going to be times when you and I are going to disagree, and we need to get past that,” Joyce told her father.

The father and daughter discuss their disagreements in his office, away from the board table. “We talk about it immediately,” she says. “And I think that is really healthy.”

In certain cases, they find it easier to settle their differences via email. “He hears me a little differently” when they put the issues in writing, Joyce says of her father.

“I will send him an email and say, ‘OK, these are the points.’ And then he’ll send an email [saying], ‘Well, these are my points.’ He and I have this color chart. He’ll do his in red, I’ll do mine in blue, and that’s how we work it out.”

Duchossois recalls a recent board vote on a potential acquisition. “We’d gone through it, at the board meeting, in executive session, [in] handouts — the whole shebang,” he says.

When the board voted on whether to move forward with the acquisition, Joyce and another young family director voted no. Duchossois realized he had misinterpreted their viewpoints. The board discussed the strategic value of the move and ultimately voted to go ahead.

The independent directors told him that the divided vote was the sign of a healthy family dynamic, he says. “The family has enough self-confidence and trust in each other to disagree. The power of the family board requires that there be independent thinking and challenge, at the right time and in the right way.” Hopefully, he adds, these discussions ultimately lead to consensus.

The family values, he continues, are an important focal point for company executives and the board. “As part of the onboarding for all of our directors and all of our senior officers, we get back to the whole issue of values,” he says. One of those values is trust.

A high-trust environment provides a setting for constructive conflict in the boardroom. “It’s very difficult to have trust if the ownership and the senior executives are [not sharing] what’s on their mind,” Duchossois says. “Let’s get it on the table. You can’t solve the problem if you can’t see the problem. Whether it be in executive session or you call me up after the board meeting is over, please, don’t let something fester.”