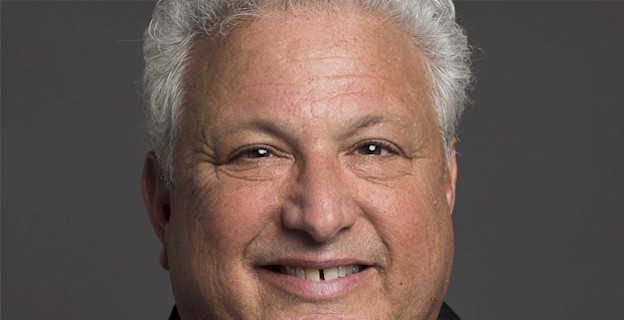 Results from a 2014 board compensation survey offer some benchmarks for private company owners and directors.

Lodestone Global recently completed our 4th Annual 2014 Private Company Board Compensation Survey.  The survey included 235 companies across 31 different industries and 35 countries to analyze current board practices and compensation around the world.  All the respondents were members of the Young Presidents’ Organization (YPO-WPO), an international group of Presidents and CEOs. The organization unites approximately 22,000 business leaders in more than 125 countries. The 235 respondents were all CEOs of companies ranging from $10 million to over $1 billion in revenues.

Public company comparisons
While international private companies are closing the compensation gap, public companies continue to increase their pay versus their private counterparts.  The 2014 compensation statistics suggest that public directors are paid more than quadruple their private peers.  The results of the survey do not necessarily prove that private company directors are underpaid, but rather, they highlight current compensation trends around the world.  The significant increase in number of respondents, from 54 in 2012, to 235 in 2014, indicates that board compensation is becoming an even more important topic of discussion for many private and family run companies.  As private company governance grows in importance, perhaps director talent and compensation will also increase.

Note that a statistically insignificant number of private companies used equity to compensate their board members in the survey.  This continues to validate the widely held belief that private companies do not use equity as a key element of their compensation programs. 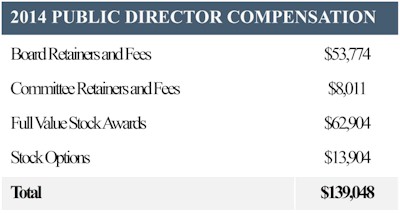 Retainers and per-meeting fees
One would expect the annual retainer to rise in line with company revenue size.  Our data set generally shows this trend.  The one outlier in the 2014 data, the $500 million-$1 billion category, can be explained by a number of respondents using higher per meeting fees this year to reach total compensation numbers appropriate to the size of the company.

In 2014, while median annual retainer decreased for the $100 million-200 million segment, actual total compensation remained the same as companies shifted towards increased per meeting fees and lower annual retainers.

In the segments greater than $500 million the decrease in median annual retainer can be explained by a number of family majority-owned businesses that pay family members significantly below market rates for annual retainer.

One would expect per-meeting fees to also rise in line with company revenue size.  Our data set generally shows this trend as well.  The largest appreciation in per-meeting fees happened for companies below $500 million with nearly every group showing a substantial increase.  The $50 million-$100 million bracket paid 25% higher annual retainers but slightly less (-17%) in per meeting fees this year.

In the segments greater than $500 million, the decrease in median per meeting fees can be explained by a number of family majority-owned businesses that pay family members significantly below market rates for per-meeting fees. 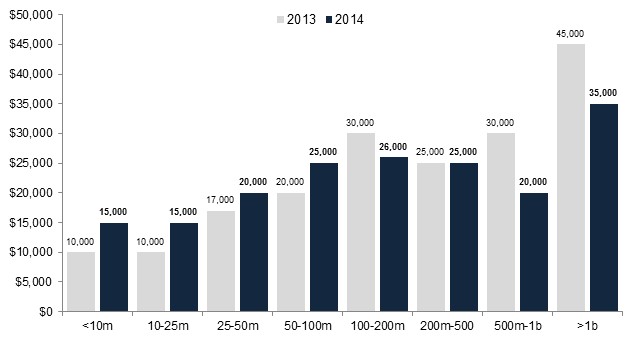 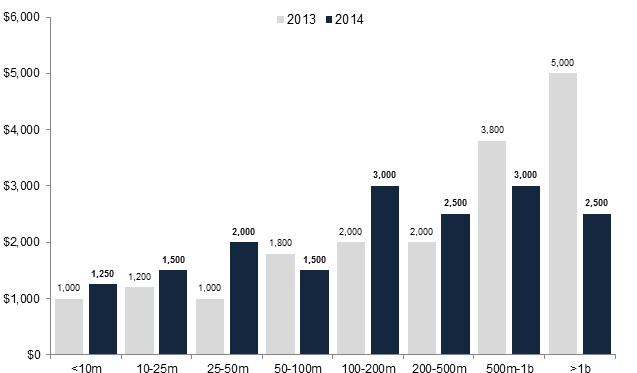 Family-owned company benchmarks
Of note, 42% of the survey respondents were family-owned companies. The high participation rate of family majority-owned respondents highlights the importance of professional corporate governance to family companies. The median number of board members was six, with three independent directors. This has not changed over the four years the survey has been running.  A significantly larger board leads to inefficiencies, while a smaller board risks limiting diversity of perspective so essential to driving effective strategy.

Interestingly, 84% of respondents say board compensation is not linked to performance, the same percentage in 2013.  Without the pressure of public scrutiny, private companies seem immune to this trend.  Perhaps that is why public companies continue to widen the director compensation gap.

Bernie Tenenbaum is Managing Partner of Lodestone Global, and has personally been a member or assembled nearly 50 Boards of Directors. His experience spans the public, private, and non-profit board environments. He currently serves on the Advisory Board of Diesco, one of the largest Caribbean-based manufacturing companies, as well as an Advisory Board member for the Woldenberg Group, a Chicago based conglomerate specializing in learning aids, laboratory distribution, and real estate businesses. Additionally, Bernie serves as the President of Children’s Leisure Products Group (CLP). He led CLP’s acquisition of Vivid Imaginations, Ltd., the largest privately held toy company in the United Kingdom. Vivid’s revenues at the time of the acquisition were in the $50 million range. Today, Vivid’s revenues exceed $360 million after a number of follow-on acquisitions, and the company now exports to 32 countries. Research assistance provided by William Tenenbaum, Lead Associate of Lodestone Global.

The Key Pillars of Effective Private Company Governance
When and Why to Sell the Business
Board Evaluations: Value, Types and Process