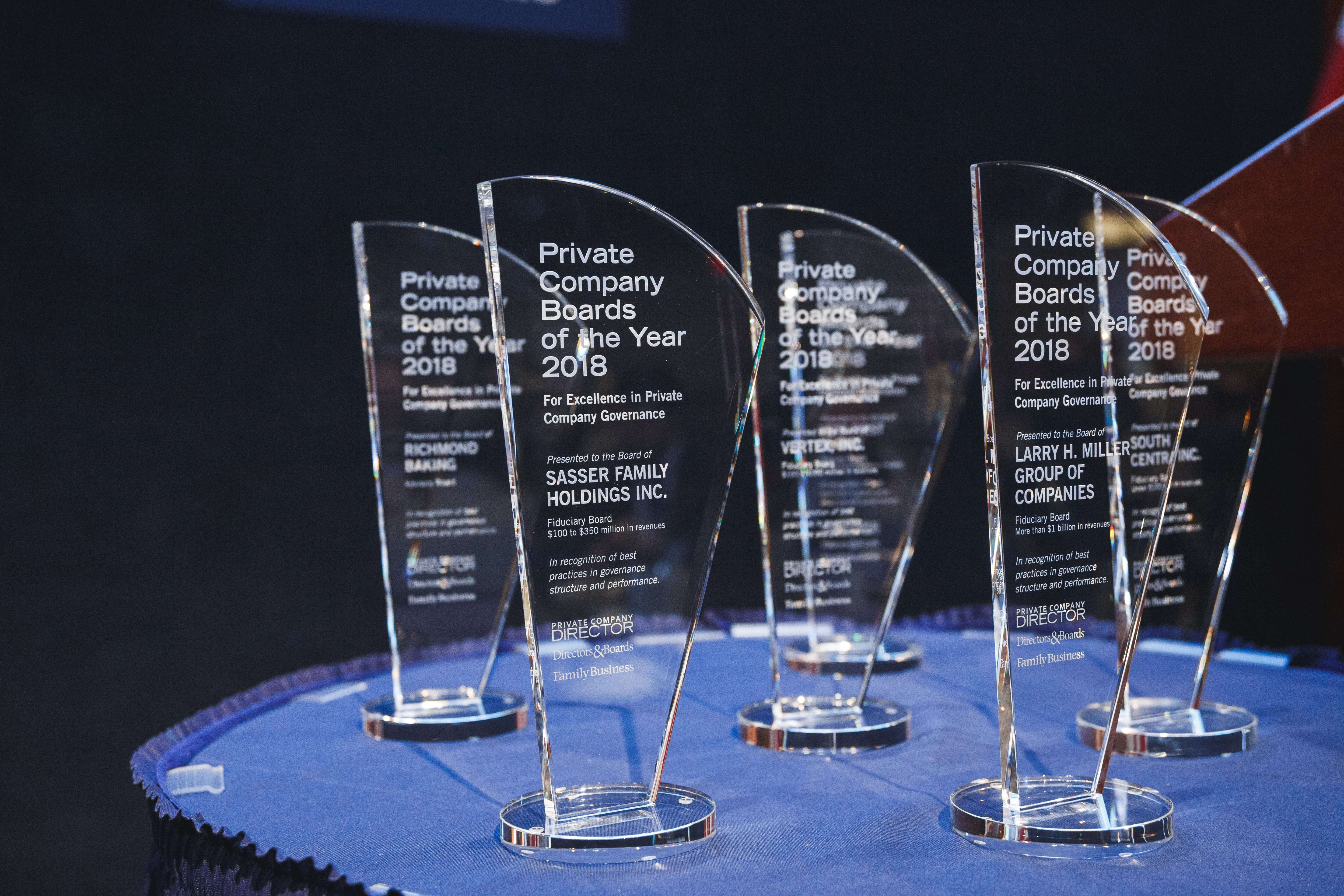 Company owners and managers value their directors and rely on their guidance, expertise

Private companies are often able to navigate transitions, everything from the death of a leader to major acquisitions, thanks to strong board governance.

The six top private boards, recognized by Private Company Director, Directors and Boards and Family Business magazines as governance innovators, have directors who are change agents, providing company owners and executives guidance through transformation. They are valued by management for their forward thinking and expertise, bolstering stability and support to take companies to the next level.

Whether fiduciary — boards that protect shareholders by voting on binding decisions for company management — or advisory boards — more informal boards that have no binding regulatory role, the nominations for Private Company Board of the Year put trust in their directors to guide their businesses through whatever changes they faced.

The winners range in size, from under $100 million to over $1 billion in revenue. They are family and private equity businesses with advisory and fiduciary boards.

Here’s an overview of the winners.

Fiduciary Board, over $1 billion 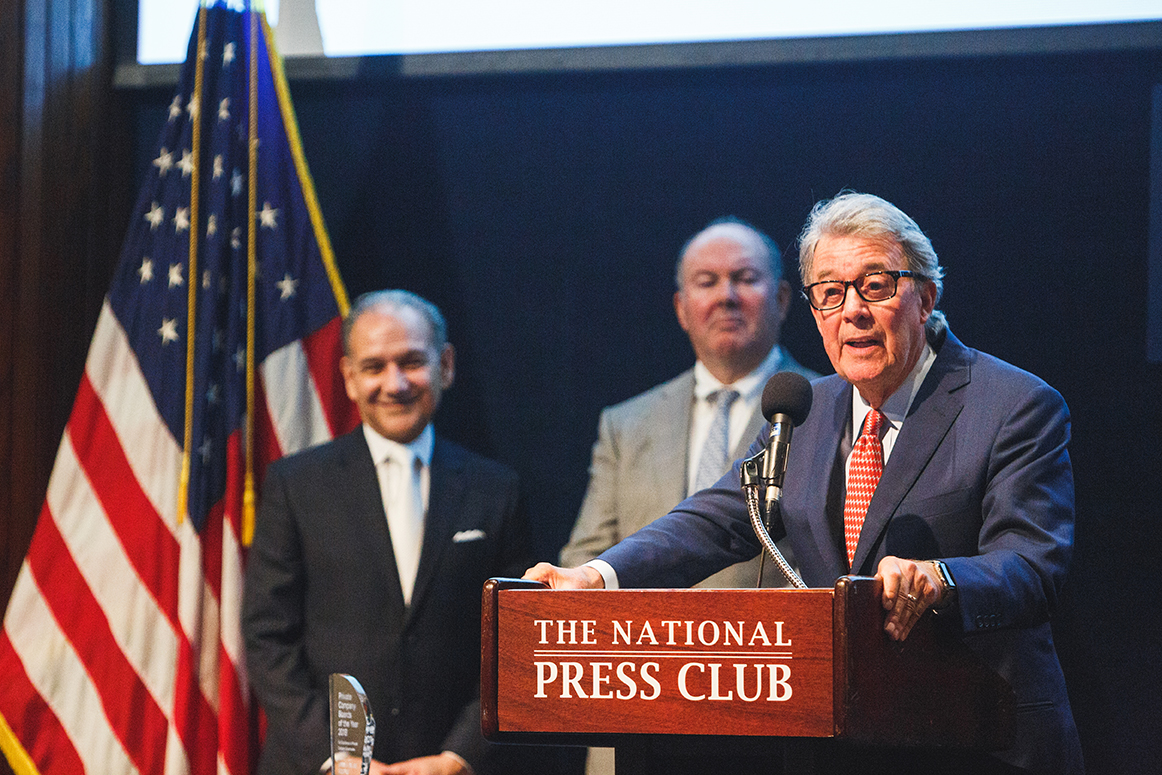 The Larry H. Miller Group of Companies has grown from a single Toyota car dealership to a $5.5 billion business in just under 40 years. Married couple Larry and Gail Miller bought that first dealership together and when Larry died in 2009, Gail wanted to keep the company within the family in perpetuity; a goal that was shared by Larry who was a proponent of good governance.

Several years after Larry’s passing, Gail found a note Larry had written saying: “Need to organize an independent board of directors. “ That prompted Gail to seek out the help from a host of sources, including the National Association of Corporate Directors (NACD). The board was announced in 2015.

“We’re a pure entrepreneurial business, but the business is too big to manage without some help— and that’s why we formed the board,” says Gail, who serves as chairman of the company’s board. “We had 80 companies under one umbrella, but no formal board. We had committees of senior managers, but no board, to help lead coordination between the businesses.”

The board is made up of four family members, one employee (the CEO), one former executive of the company, and six independent directors.

“We bought the Jazz in 1985 for $22 million — worth north of a billon now,” Gail says. “But we didn’t buy it to sell it, and there were many questions from the community after Larry’s death on what might happen to the franchise. So we put our sports into a legacy trust, with some other companies to provide continuing financial support, with the intention that the Jazz will stay in Utah in perpetuity.”

The Larry H. Miller Group of Companies governance highlights include: 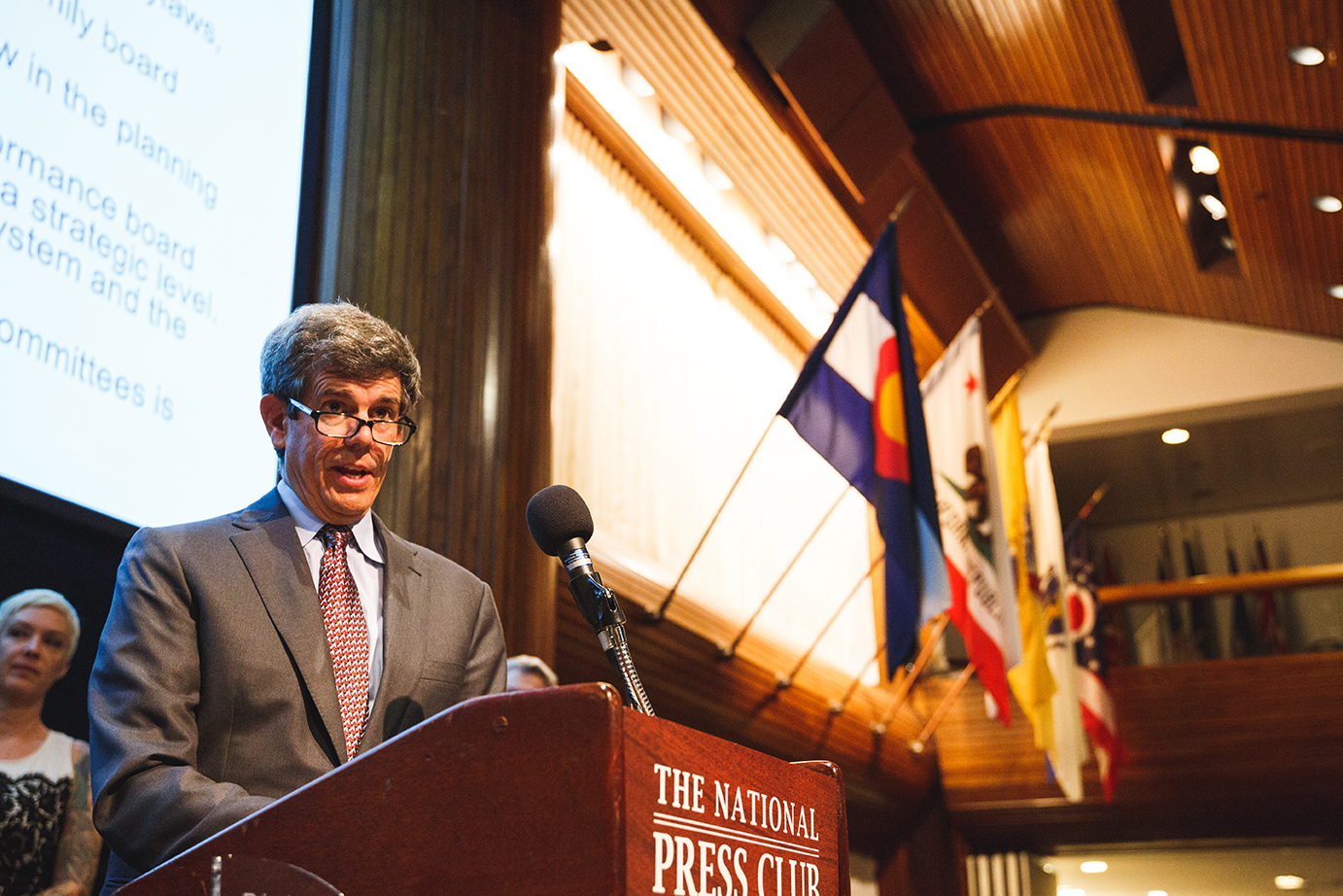 The board at Sasser Family Holdings Inc., has helped the company successfully navigate hiring the first non-family CEO, acquisitions, a complex international realignment, short- and long-term incentive plans and succession planning throughout the organization.

Sasser, founded in 1928 and is in its fourth generation, first established a board in 1960 as an all-family board, has evolved to three independent directors, three family directors, the non-family CEO and Fred Sasser, former CEO and executive chairman (his position ends at the end of 2018). There is also an “associate director,” a non-voting seat held by a family member chosen by the family council.

“We’re looking ahead,” says Bill Hudson, president of the H.D. Hudson Manufacturing Company and an independent member of the Sasser board. “We’ll have one of our board members terming out, and so we’re now going to start laying the groundwork for starting up our process for recruiting our next independent director.”

The company has an exhaustive selection process identifying key skill sets and aligning those skills to where they want to take the organization in the future. “We’ll identify the gaps and that’ll help us write up the specifications for our director recruitment,” Hudson explains. “And then we’ll go out to the marketplace in an organized fashion to find that.”

Shares of Sasser are 100%-owned by family members. The shareholder group consists of about 15 adults and 10 minors (some of whom are owners via trusts). 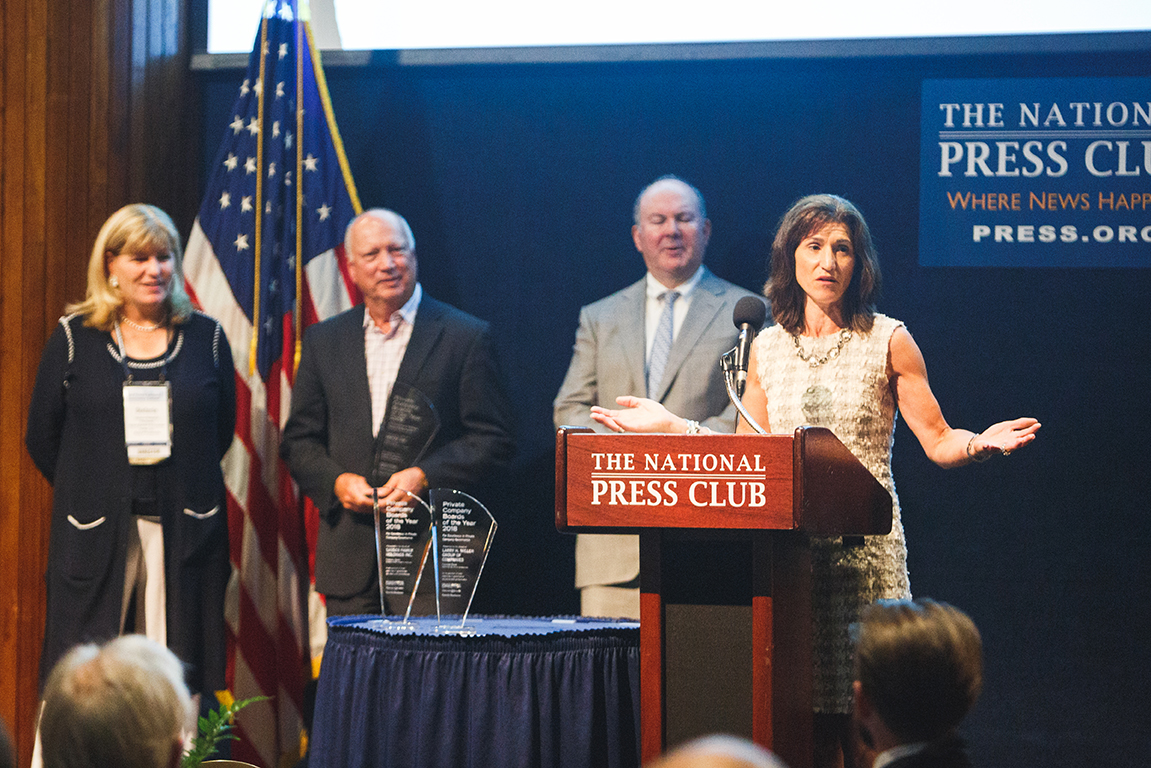 Vertex, Inc., providers of tax technology and services, has seen a host of benefits from good governance, including prompting more accountability and strengthening succession planning.

In 2000, the three children of Vertex’s founder, Ray Westphal, bought the company from their father and immediately sought to create an independent fiduciary board.

“We knew the value of creating a board and filling it with folks far wiser and experienced then ourselves,” says Jeff Westphal, former Vertex CEO, co-owner and board member.

“Over time,” he continues, “our independent directors have been invaluable assets to us, be it through objectively evaluating and contributing to company strategy, insisting on accountable operational/financial performance, executive succession planning a way for our first non-family president in 40 years, and all the joyful, stressful, complicated and intricate issues that arise for family's that co-own a growing business in a dynamic market together.”

Finding directors with diverse talents, even if they were outside of the Westphals’ network, was important to the siblings. It was also was a top priority to set the board in place as soon as possible after taking over ownership.

The decision to build a board wasn’t to mediate any conflict between the owners; the family wanted good governance in place to prevent conflict.

“They’ve really taken the view they want to treat this as a public company in terms of governance,” says former PwC partner Ric Anderson, one of Vertex’s independent directors.

Vertex provides cloud-based and on-premise solutions that can be tailored to specific industries for every major line of tax, including income, sales and consumer use, value added and payroll.

Fiduciary Board, under $100 million 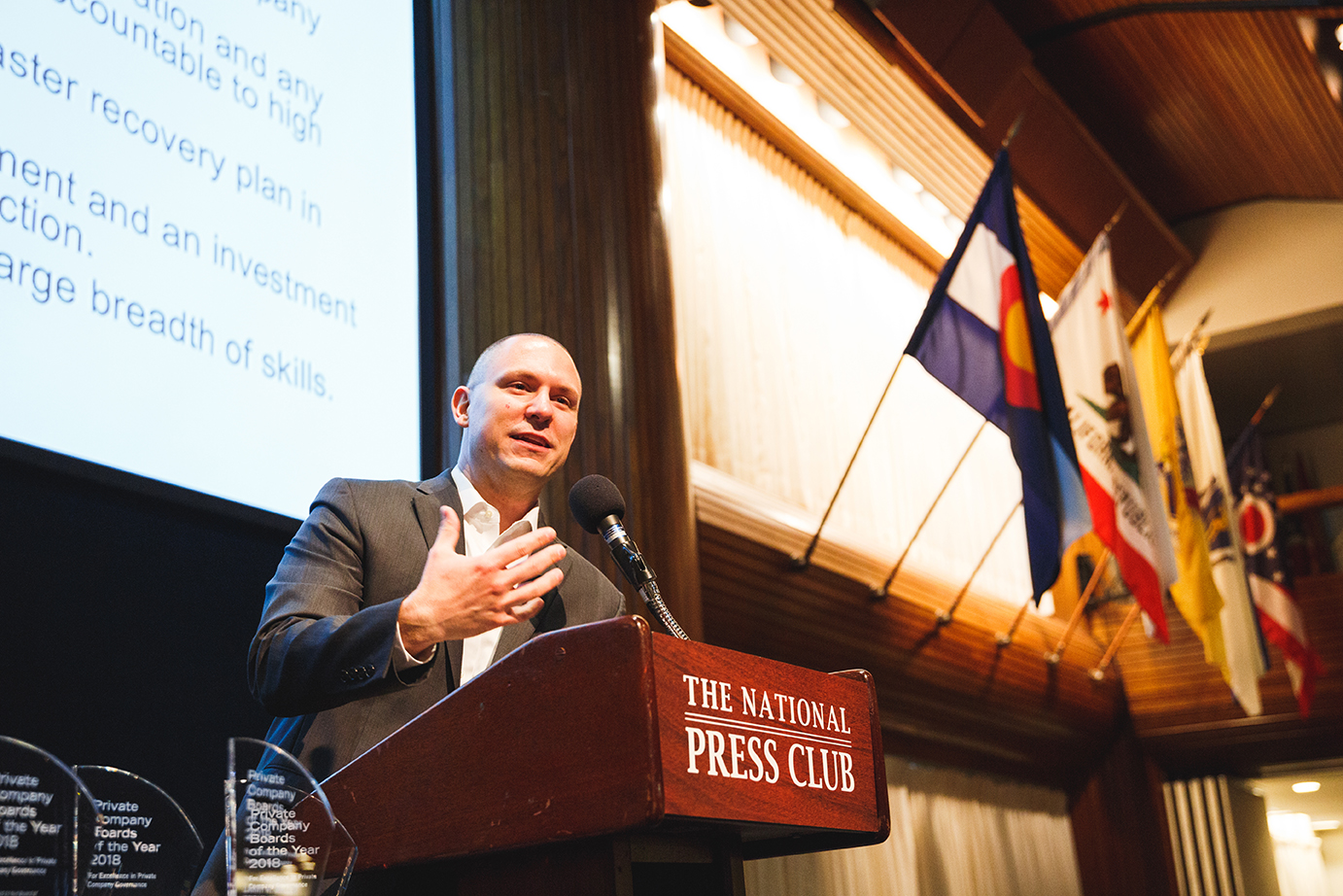 South Central Inc. has had a fiduciary board for 30 years. The family office and investment company owned by the Engelbrecht family was initially rooted in media and telecom, but the company’s investments continue to be wide-ranging in spaces such as healthcare, consumer package goods, technology, banking, real estate, HR/PEO services and contracting services.

John David Engelbrecht pushed the family to set up strong independent governance three decades ago. John David was an experienced public board director and brought that expertise back to the family business, while “melding it with our family values all those years ago,” says his son, John P. Engelbrecht who is CEO of the company. His dad is president and chairman.

What started with two independent members now has five with only two family members on the board. Each director meets independent standards and has shown leadership as a CEO, CFO or managing partner in various industries.

The board is “independent to a fault,” says one independent board member, noting that company executives and owners are transparent and willing to be challenged by the board.

Independent director Andy Goebel is an expert in governance, having served on other boards and as a corporate secretary. Goebel, who served on another board with John David Englebrecht, was chosen because of his financial expertise.

Goebel says the family takes their governance cues from public boards. “They see value in the governance model,” he notes. “John David, being an independent member of Vectren, knows board members need to be independent.” (Vectren is an Evansville-based utility company.) 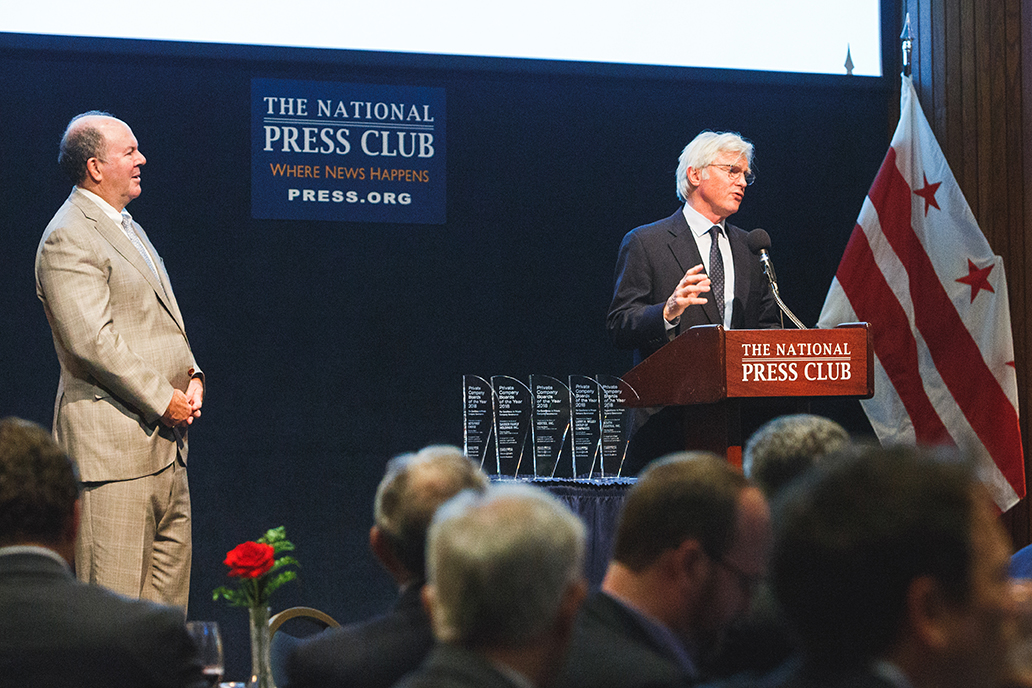 At Vets First Choice, a private equity backed provider of technology-enabled healthcare services for companion and equine veterinary practitioners, the board is involved in all aspects of strategy.

The company is owned by a group of investors, but the board is not strictly made up of shareholders. The board includes two founders/investors, two independent members and six investor members.

“The board started with five members, then grew to seven and now nine.  It’s not uncommon for investors at this stage to want to be proactively involved,” says David E. Shaw, chairman of the board. “Our first investor, Polaris, is still on the board, Terry McGuire.

“We added independents right away. Ted McNamara — he had the financial background to head our audit committee. We knew him as both a CEO and CFO. Two other VCs came in when their investments were made. We seek investments from firms that would add value — and one value is serving on the board.”

The private-equity-backed company is now expanding geographically to China.

The board’s impact has been strong on strategy, especially in the acquisition and partnership strategy, of the company. The independent directors on the board, in addition to contributing to this strategy, also serve to protect the interests of management to ensure that over dilution of management incentives doesn’t occur.

Advisory Board, under $100 million 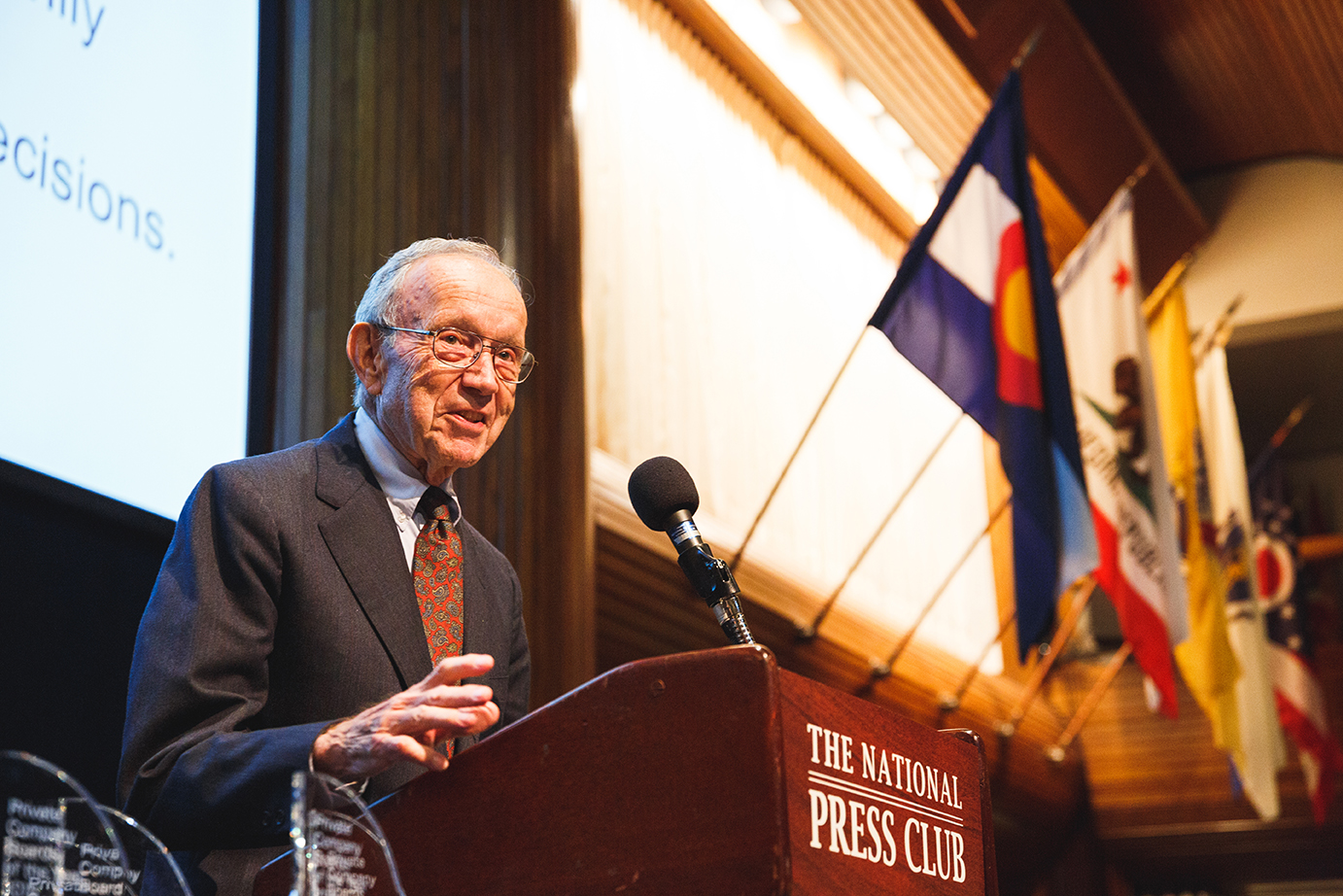 Richmond Baking, one of the oldest family-owned cookie and cracker bakery in America, went through a “significant reorganization” two years ago when the chairman of the board and patriarch, Jim Quigg, died.

And it was the board that helped the family and company through the painful loss.

“I cannot imagine how difficult my father’s passing would have been if we didn’t have a board,” says Bill Quigg, Jim’s son and CEO of the company. “The six of them became dads to us. They took their loyalty and dedication and just stepped up, and took on that leadership role for our company.”

The family put an advisory in place about 10 years ago with six non-family and two family members.

The one business decision Bill said really showed the board’s value was closing down their struggling Oregon operations.

In 2010, Bill found himself stretched thin, especially having to travel to keep tabs on their only West Coast facility. “Frankly, I had to swallow my pride,” he explains, because he started that business in 2000 and it was supposed to be his mark on the company. The company flew the board out to Oregon to see the operations and that solidified the board’s decision to advise him to pull the plug. “I wasn’t upset with them, but I needed them to help me push that last 1% of the decision,” Bill says. “They provided the catalyst.”