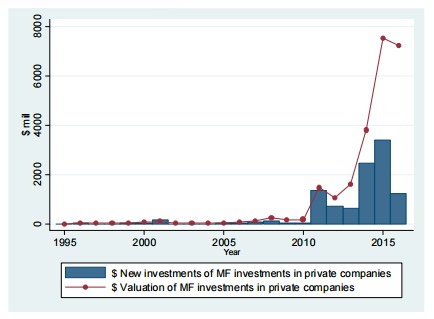 That infusion of money from mutual funds may be delaying some private firms from going public, according to the findings of Mutual Fund Investments in Private Firms, a recently published report put out by professors at Drexel University’s LeBow College of Business and the University of Iowa.

“We tend to think of these funds focusing on the public firm,” explains Michelle Lowry, a coauthor of the study and finance professor at LeBow. “We’re seeing it move into the private space, and at the same time we have private companies reluctant to go public as early as they might have 10 to 15 years ago.”

Not all companies are putting off going public because of the mutual fund investments as the main reason, Lowry notes. “The word we like to use is 'enabling' them.”

Why are they doing this?

“The types of companies they would have bought 15 years ago are simply not there as public entities,” Lowry says. “What does that mean? You shift your investment a bit, or you move a bit into the private space. They are saying we think this is a place we can earn higher alpha for our investors.”

The decline in the number of IPOs is also driving the trend, she adds.

Indeed, there has been a 65% decline in the number of U.S. IPOs from a 2014 high of 363, according to research from Fortune. The flow of initial public offerings slowed considerably in 2016, hitting just 128—the lowest number since the financial crisis—with few signs of picking back up.

The biggest mutual fund investors upping private firm investing are T. Rowe Price, Black Rock and Fidelity, Lowry says, and they’re investing in larger private companies such as Airbnb and Uber. “Most of the capital is going to companies in the later stage of the VC [venture capital] round.”

Mutual funds can’t pile up on private company investments because they are legally only able to invest 15% in net asset value in restricted and illiquid securities, things you can’t easily get out of, she points out. “For most funds it’s incredibly rare to see anyone above 5%, most are around 2%.”

T. Rowe Price is the pioneer in this space, jumping on the private-company train ahead of its competitors with the company’s New Horizon fund manager Henry Ellenbogen long touting the benefits.

An article earlier this month, Financial Times reported that the $17 billion New Horizon fund with $1.2 billion of investments in 63 private companies has had annualized weighted returns of about 35% since 2009.

In a Bloomberg article from 2015, The Man Who Taught Mutual Funds How to Invest in Startups, Ellenbogen said:

“The private and public markets are in a transitional period where they are merging. While there may be a shakeout coming, we’re not going back to the world as it was.”